What is the story you are telling yourself?

We all love to hear stories. Stories are what give meaning and colour to life. I remember how at a very young age one of our children developed a fantasy world with three characters ‘Hobie, Hatsie and Hammo’. Another child created an inner world of two mothers – calling them a ‘white mum’ and a ‘dark mum’. Both these children loved to live in those fantasy worlds, creating stories of meaning and significance to them, even though they were only 3 or 4 years old. 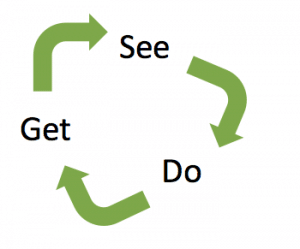 But stories are not just something for young children. Actually all the time we are telling stories to ourselves. Right now there is a story going on in your mind about something going on in your life. What do I mean?
In life all sorts of surprises and unexpected events can happen. However, as important as what happens to us is our interpretation of what happens to us. The see-do-get model is a good starting point. It is very simple, but also quite profound.

What this says is that the way we see the world (our paradigm) leads to what we do (our attitudes and behaviours) and what we do leads to the results we get in our lives.

That is not normally how we think or how we see change….

Imagine for example you come to visit me in London having never come before. You have a map in your hand, but unfortunately although the map says London on it, due to a printing error, in reality it is actually a map of Sydney, Australia (let’s assume you have never been to that city either). Unsurprisingly you find yourself lost.

So you ring me up on your mobile phone to get directions. Instead of asking you about the map in your hand I just say, ‘be positive’ (attitude). What will happen? You might be in a more positive frame of mind, but you will still be lost! Or if I say, ‘try harder or go faster’, you may well double your efforts and speed up, but you will just get to the wrong place faster. Why? Because your paradigm or map is the wrong map of reality!

The fundamental problem has nothing to do with your behaviour or attitude. Having said that, if you have the right map of London then it is important to be methodical and focussed, especially when you encounter frustrating obstacles along the way. In that case having the right attitude can make a huge difference. But to begin with the most important thing is to have the right map – or to see reality as it actually is.

According to Stephen Covey each of us has a whole variety of maps in our head. He helpfully divides them into two categories: maps of the way things are (realities) and maps of the way things should be (values). In that gap between reality and our values we create a story. We interpret everything we experience through these mental maps. We hardly ever question their accuracy.

Often we are not even aware we have them. We simply assume the way we see things is the way they really are or the way they should be. It was Albert Einstein who said, “The significant problems we face cannot be solved by the same level of thinking that created them.”

In other words to bring about lasting change rather than working on attitudes and behaviours we need to examine the paradigms out of which those attitudes and behaviours flow. Is there something about the way I see the person or the issue that is contributing to the problem I am facing? For example, say I have a difficult colleague at work who appears to ignore me one day. I could create a whole story in my head as to how that person is against me and disapproves of me. Or alternatively I can create another story that maybe they are just preoccupied and busy with what they have to do. Two different stories produce quite different feelings and emotions within me. In turn they will lead to quite different behaviours.

Another example is that given by Stephen Covey when he was on a subway train in New York on a quiet Sunday morning. It was apparently calm and peaceful.
Suddenly a man and his children came into Covey’s carriage and the whole atmosphere changed. The children were running up and down the carriage, being loud and noisy, upsetting the other passengers. The man sat down next to Covey and closed his eyes, apparently oblivious to what his children were doing. Covey admits to feeling very irritated and angry with this man. He created a story in his head as to what an irresponsible parent this man had to be. Finally it was getting too much and so he turned to him, requesting that he take more responsibility for his children. The man turned to him, informing him that their mother had died only an hour earlier, saying “I don’t know what to think, and I guess they don’t know how to handle it either.”

Here is how Covey puts it:

‘Can you imagine what I felt at that moment? My paradigm shifted. Suddenly I saw things differently, and because I saw differently, I thought differently, I felt differently, I behaved differently. My irritation vanished. I didn’t have to worry about controlling my attitude or my behaviour; my heart was filled with the man’s pain. Feelings of sympathy and compassion flowed freely. “Your wife just died? Oh, I’m so sorry! Can you tell me about it? What can I do to help?” Everything changed in an instant.’

We all have similar fundamental shifts in our thinking when something life changing happens or we suddenly step into a new role, becoming a husband or wife, parent or grandparent, or take on a new area of responsibility at work. Examples for me include spiritual questioning,  getting married, becoming a parent, turning 50 and the sudden death of a close friend in 2014.

The alternative is keeping the same story and repeating the same pattern of behaviour. One definition of insanity, someone once quipped, is doing the same thing again and again while expecting a different result.

What new story do you have to tell yourself?

4 thoughts on “What is the story you are telling yourself?”