Hope is a funny word in the English language. When we use it in everyday conversation we tend to speak in terms of a vague possibility that may or may not come to pass. So we say, for example, “I hope it doesn’t rain tomorrow.” It may or may not rain tomorrow and I am not entirely sure what the actual outcome will be. So I use the word hope to describe my uncertainty. But hope is a much richer and deeper word than that. 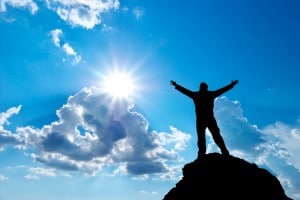 In the dictionary, hope is “an optimistic attitude of mind based on an expectation of positive outcomes related to events and circumstances in one’s life or the world at large”. As a verb, its definitions include: “expect with confidence” and “to cherish a desire with anticipation”.

The truth is we cannot live without hope. In fact hope is more fundamental than even food and water, as our bodies can survive for a period of time without them. But take away hope and one’s fundamental purpose for living is gone. Without hope even the smallest challenges seem impossible to handle. It can be hard to even get out of bed in the morning if there is no hope. As a psychiatrist in training loss of hope was one of the states of mind we were encouraged to search for in all the patients whom we interviewed. The reason? That loss of hope could be a pointer to a potential risk of suicide.

But when you are filled with hope in the future you can face anything in the present.

In  the early 1930s the Communists in China were in disarray and pessimistic about their future role and influence. On 5th January 1930 Mao Tse-Tung wrote a famous letter called, “A Single Spark Can Start A Prairie Fire,” challenging their doubts and fears about ever taking power. Building on the idea that revolution would come ‘soon,’ (it would be still be another 19 years):

How then should we interpret the word “soon” in the statement, “there will soon be a high tide of revolution”? This is a common question among comrades. Marxists are not fortune-tellers. They should, and indeed can, only indicate the general direction of future developments and changes; they should not and cannot fix the day and the hour in a mechanistic way. But when I say that there will soon be a high tide of revolution in China, I am emphatically not speaking of something which in the words of some people “is possibly coming”, something illusory, unattainable and devoid of significance for action. It is like a ship far out at sea whose mast-head can already be seen from the shore; it is like the morning sun in the east whose shimmering rays are visible from a high mountain top; it is like a child about to be born moving restlessly in its mother’s womb.”

There is a huge amount on which I differ with Mao Tse-Tung, but the certainty with which he could see the Chinese revolution would come, is fascinating.

Jesus’s death on the cross and resurrection after three days takes this kind of hope to a completely new level.

The death of Christ on the cross left the disciples despondent, disillusioned and near to despair. But after the resurrection in a short space of time they emerge as those who risk their lives for the name and honour of the Lord Jesus Christ and are described as turning the world upside-down.

When Jesus walked out of the tomb with a transformed body that can never die, He was marking a new chapter in the history of the world. This had been predicted hundreds of years before in the Old Testament scriptures and was witnessed by 500 people at the same time.

Alan Norman points our how the Bible explains that when Jesus rose from the dead, He engaged with all the human senses:

“The women at the tomb clasped His feet. The disciples walking to Emmaus ate the bread He gave them. Those coming ashore in Galilee would have caught the aroma of the fish He was cooking… As well as touch, taste and smell, the risen Jesus engaged with the other two senses: sound and sight. ‘Were not our hearts burning within us while He talked with us on the road and opened the Scriptures to us?’ the disciples exclaimed. ‘I have seen the Lord!’ Mary Magdalene excitedly told the disciples.”

But that is not all! This resurrected Jesus was also able to walk through walls! His resurrected body has a completely different nature and dimension to our current bodies that are still subject to decay and death.

As the early disciples experienced the resurrected Jesus in their lives their fears and doubts following the tragedy of his death were transformed into a marvellous confidence and joyful resilience that could face any challenge or opposition.

It is understanding the resurrection of Jesus in these terms that brings hope. Have you tasted something of this hope?

For more on the meaning of Easter do see:

What Is So Good About Good Friday?

Is This The Best News You Have Ever Heard?

4 Personal Implications Of The Resurrection