Have you had your champion breakfast?

No I am not referring to your first meal of the day – important as that is! Rather it is the power of feedback to enable you to both understand yourself better and to discover and grow in your areas of strengths and giftedness. 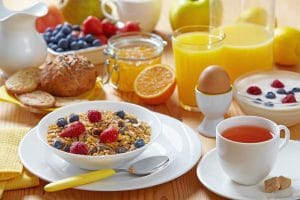 Feedback has been called the breakfast of champions. The problem is, however, all of us struggle to give or receive feedback unless it is in a manner or context within which we or the other person does not feel threatened. The classic ‘feedback sandwich’ of say something positive, then the usually negative feedback, followed by something positive again can come across as formulaic and contrived. So while it can be effective it does create tension and anxiety for both the person receiving and giving feedback.

Even the anonymous 360 degree feedback systems that are increasingly popular in health and business environments run into the problem of  telling more about the person doing the rating than the subject who is supposed to be getting the feedback. That has certainly been my experience and those I have discussed it with.

But how about creating systems to provide feedback for yourself?

This is how Peter Drucker, arguably the greatest management thinker of the 20th century put it in a Harvard Business Review article:…

“Whenever you make a key decision or take a key action, write down what you expect will happen. Nine or 12 months later, compare the actual results with your expectations. I have been practising this method for 15 to 20 years now, and every time I do it, I am surprised.”

I accidentally discovered that the practice of journalling provides something of an insight into what Drucker is referring to here. While no where near as disciplined as him, by regular recording my thoughts and feelings about various activities I have been involved in I too have been pleasantly surprised how often wrong I can be in my interpretation of what is going on around me or with things concerning me. Looking back at the situation that troubled me six or twelves months earlier so much helps to put worries, anxieties and challenges into perspective. This form of self-feedback can be enormously powerful in bringing positive change and improvement in our lives. It has also revealed to me my tendency to interpret so much of my life in a negative manner. (See Why I Am Working On Becoming A Happier Person).

One of the most respected Bible teachers in the world, Tim Keller has spoken openly of  the phenomenal growth during the 1990s of his church, Redeemer Presbyterian Church in New York City.  He has explained how it was at least partly attributed to the power of feedback.

Every Sunday after preaching his sermon, he would get immediate feedback from the congregation in the form of a 45 minute to one hour Question and Answer session. Tough and challenging though it was, it provided a real time understanding of the issues his listeners were struggling with along with how relevantly he was able to communicate Bible truths. The direct and forthright nature of New York culture, along with Keller’s humility and willingness to allow himself to go through such scrutiny may also have had a role in enabling the feedback to be particularly effective. Week after week as he developed his skills to his audience Keller was able to insightfully and prophetically speak into the lives of his listeners. Outsiders not only started regularly coming, but would also invite their friends as they found coherent and helpful answers to the questions of their lives. (For an example of Keller’s skill in engaging with the questions of life see his talks at Google given in 2008 here and in 2016 here).

With our increasingly sophisticated smart phones we are also able to get instantaneous feedback on as diverse a range of behaviours as our exercise and eating habits, our sleep and even how we spend every minute of every day. Such a wealth of data if we choose to analyse it can be enormously powerful to bring about positive changes in our habits and life style. The exercise app on my smartphone has I am sure helped me to persevere with my exercise programme when on other occasions I might easily have given up.

How have you found feedback helpful in your life?

2 thoughts on “Have you had your champion breakfast?”