Did Churchill’s depression make him a great war-time leader?

Winston Churchill has been described as one of the greatest war-time leaders of the world. His leadership of Britain during the dark days of 1939-45 was pivotal in the outcome of World War 2. (For more on this see The Importance of Right Attitude Part 2). 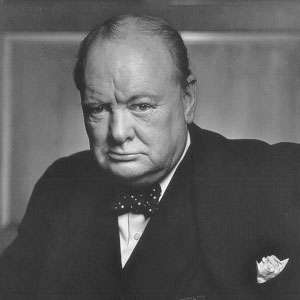 He was a fiery orator, recognised as the man who refused to submit to tyranny and through whom first a nation and then the world found strength to resist and ultimately prevail.

But behind this great persona and larger than life character was a man who also suffered through his life with depression.

In the early part of the 20th century, Violet Asquith describes her first meeting with Churchill that captures both his depression and his strength in dealing with it.

She records how for an hour at dinner he did not even speak, even though she was sitting right next  to him. His first words were to ask her age (!), and when she answered he is said to have reported with some despair, “I’m 32 already.” Then defiantly he went on, “Older than anyone who counts though.” And then savagely, “Curse ruthless time. Curse our mortality. How cruelly short is our allotted span for all we must cram into it. We are worms, all worms. But I do believe I am a glow worm.”

It may well be that those hard even bitter comments were a foretaste of the resolute determination and perseverance that was going to be so important during the dark days of World War 2.

In his book, “A First Rate Madness -Uncovering the Link between Leadership and Mental Illness,” the psychiatrist Nassir Ghaemi provides some fascinating insights into the psychological make-up of Churchill. He suggests that Churchill throughout his life had periods of  emotional highs and lows with manic and depressive symptoms. There is a lack of clarity about what his diagnosis exactly may have been, but the severity of his symptoms included:

“He was high in energy, highly sociable and extraverted, rapid in his thoughts and actions somewhat impulsive. He would routinely stay awake late into the night, with a burst of energy after midnight when in his bathrobe he would dictate his many books and conduct much of his other work. He was incredibly productive, not only serving as a minister or prime minister for decades, but writing 43 books in 72 volumes (not to mention an immense body of correspondence).”

Contrast this with the severe periods of depression that Churchill had, which he described as his ‘black dog’. In 1910 Churchill was aged 35. He was happily married, wealthy, politically powerful and widely respected. But at this time of his life he told his doctor,

“For 2 or 3 years the light faded from the picture. I did my work. I sat in the House of Commons, but black depression settled on me.”

This included thoughts of suicide and a fear of being too close to the edge of train platforms or standing by the side of  a ship. By the age of 70 he still had his internal struggles. He was by now a war hero, but had lost his bid for re-election. When visited by his doctor he complained about the balcony of his new flat:
“I don’t like sleeping near a precipice like that..I’ve no desire to quit the world, but thoughts, desperate thoughts come into the head.”

However, it may well be that Churchill’s mood swings was what was exactly needed in a world leader to fight against the Nazi threat. Here is how the psychiatrist Anthony Storr puts it:

“In 1940, when all the odds were against Britain, a leader of sober judgement might well have concluded that we were finished…In 1940, any political leader might have tried to rally Britain with brave words, although his heart was full of despair. But only a man who had known and faced despair within himself could carry conviction at such a moment. Only a man who knew what it was to discern a gleam of hope in a hopeless situation, whose courage was beyond reason, and whose aggressive spirit burned at its fiercest when he was hemmed in and surrounded by enemies, could have given emotional reality to the words of defiance which rallied and sustained us in the menacing summer of 1940. Churchill was such a man:  and it was because, all his life, he had conducted a battle with his own despair he could convey to others that despair can be overcome.”

What I take from these observations are that the difficult experiences of our lives can be part of who we become and enormously valuable at different stages of our lives.

What are your reflections on these insights from Churchill? It would be great to have your thoughts and comments.