Do you still believe your old school report?

Have a  look at this school report for a 16 year old boy from 1949. The person referred to ranked last out of 250 boys in his year group at biology and was in the bottom set in every other science subject.  What would you rate as his future prospects? 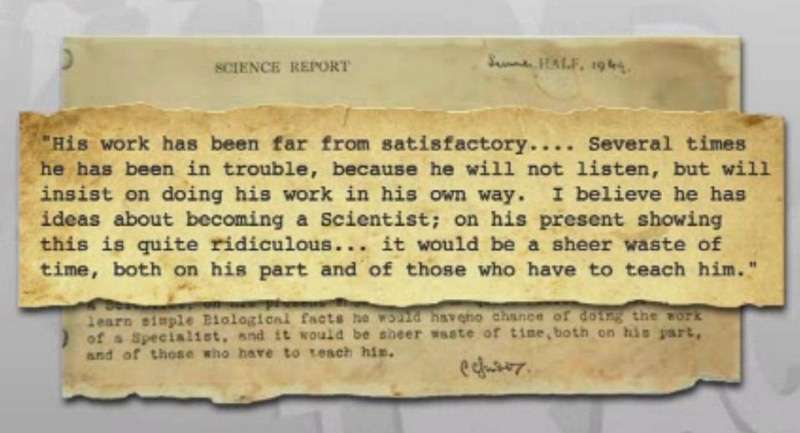 The report card is that of Sir John Gurdon. In October 2012 he was awarded the Noble Prize in Medicine or Physiology for his pioneering work on cloning.

Gurdon later had this report framed. He told a reporter “When you have problems like an experiment that doesn’t work, which often happens, it’s nice to remind yourself that perhaps after all you are not so good at this job and the schoolmaster may have been right.”

Maybe such an inaccurate school report is an anomaly or aberration. Or maybe not.

The following are excerpts from actual school reports as reported by Luke Layfield in The Guardian newspaper of 11 January 2005:

Einstein (when age 16):
Munich schoolmaster wrote in Albert Einstein’s school report, “He will never amount to anything”, 1895.

Gary Lineker (England footballer regarded as one of the country’s best ever players and who has gone onto become a TV football presenter):
“He must devote less of his time to sport if he wants to be a success”.
“His academic work is handicapped by excessive juvenility. It is time he worked out seriously his objectives in life.”
“Too interested in sport. You can’t make a living out of football.”

Paddy Ashdown (British diplomat and politician who is fluent in six languages):
“This boy will never learn languages.”

Charlotte Bronte (novelist and author of Jane Eyre):
School report said that she “writes indifferently” and “knows nothing of grammar”.

John Lennon (musician, singer, songwriter and founder member of the Beatles,  the most commercially successful and critically acclaimed band in the history of popular music):
“Hopeless. Rather a clown in class. He is just wasting other pupils’ time. Certainly on the road to failure.”

Cilla Black (English singer, actress, entertainer and media personality who in 2004 was the highest paid female performer on British television):
“Priscilla is suitable for office work.”

Jon Snow (longest running presenter of Channel 4 News):
“Snow has set himself low standards which he has failed to come up to.”

Tim Henman (who in 2004 reached the ranking of number 4 in the world at tennis):
A school report said that while he was “well-balanced, open and friendly” he lacked the “killer instinct” expected of a champion.

Alan Sugar, 1960 (business magnate, media personality and political advisor with an estimated fortune in 2011 of £770 million):
“Alan can do better than this. He has ability, but seems afraid to use it.”

The reason for sharing these examples is to illustrate how easy it is to label people and completely miss their potential.

It is also, I hope a great encouragement that our past does not have to dictate our future. It is so easy to miss the greatness others are capable of.

Maybe the other unspoken tragedy is the scripts we imprison ourselves in because of what we were told in the past or maybe told ourselves from our past. How much are those old tapes still playing in our minds? Those old tapes can be a lid to our potential. (See the Law of the Lid).

How do these examples of missed potential (at the time)  speak to you?

Is there an outdated report (from your past or from yourself) that you are still believing?

When I was 17 a computer print out (yes they existed at that time!) predicted for some reason that is still a mystery to me that one of the ideal careers I was most suited to was to be a beauty therapist!

I close with a quote from Albert Einstein:

It would be great to have your thoughts and reflections below.
(In case you are reading this from an email then please go to the website to comment).

2 thoughts on “Do you still believe your old school report?”